The Historical Society of Greater Lansing is now live at www.lansinghistory.org. Please visit today! This blog website will no longer be updated. 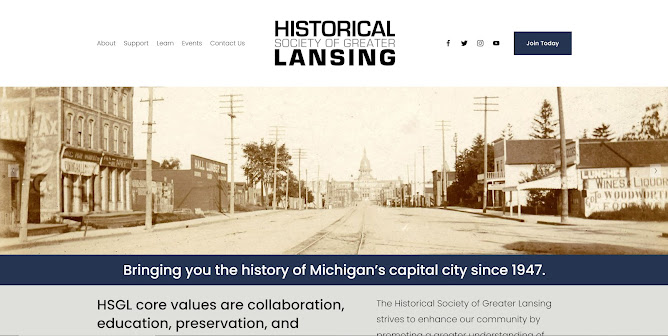 Posted by Historical Society of Greater Lansing at 9:26 PM No comments: 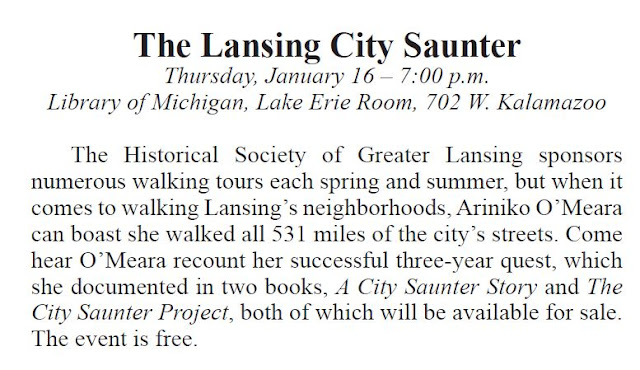 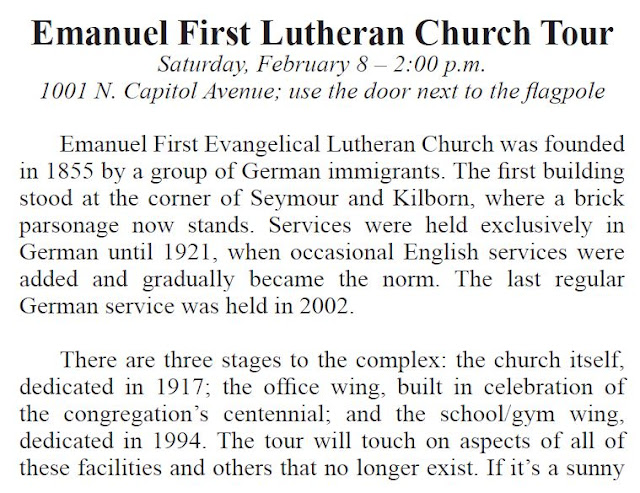 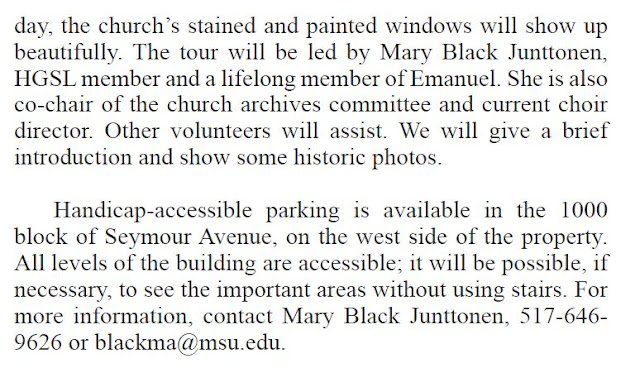 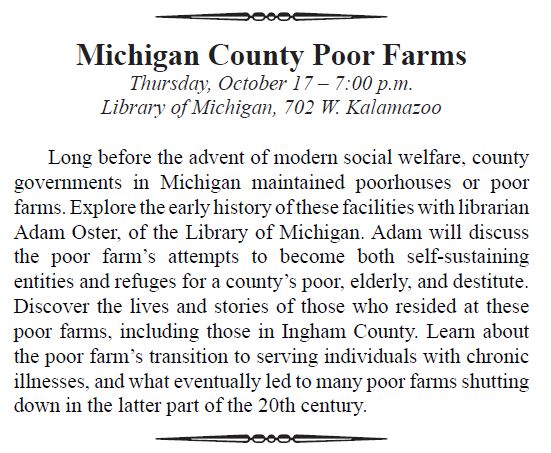 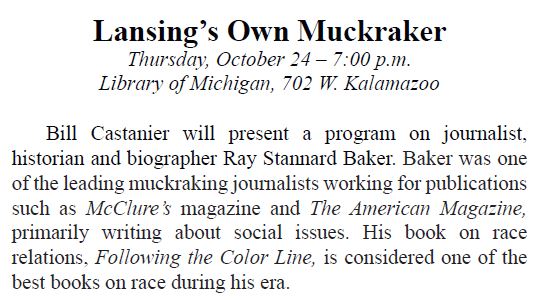 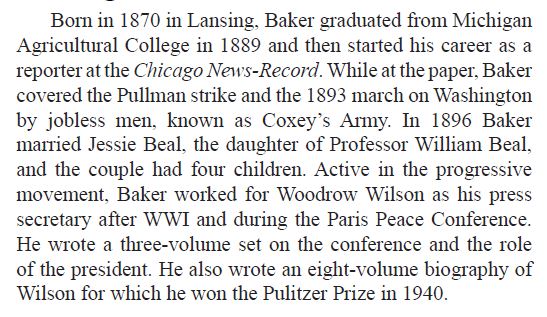 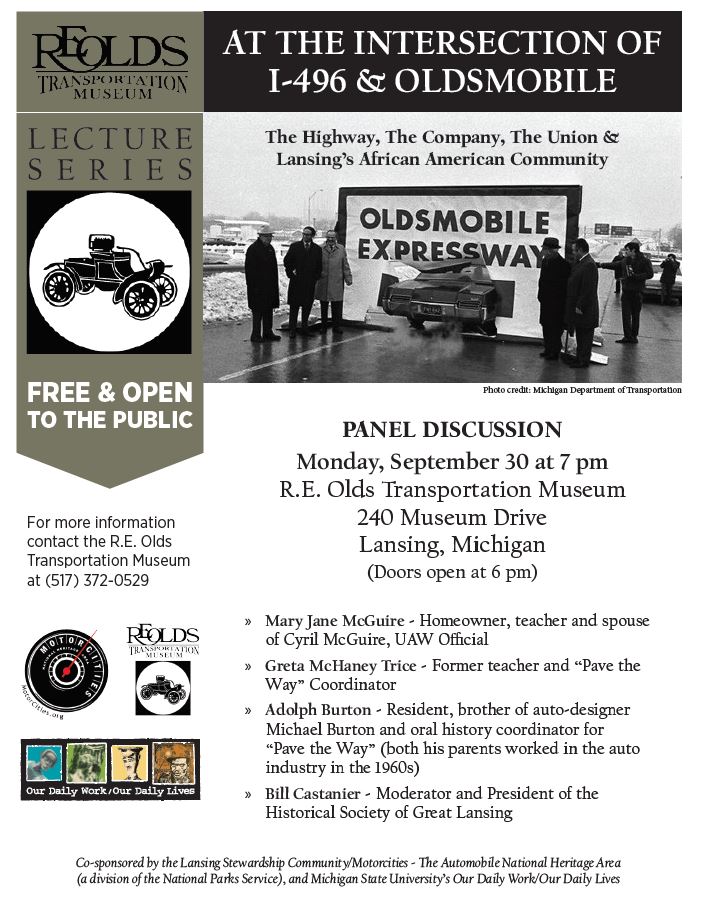 You asked and we’re responding! After many requests, HSGL
is refreshing our walking tour of downtown historic churches. The
tour will include some of Lansing’s oldest congregations and most
beautiful historic buildings, including Christ Community Church
(formerly First Baptist), Central United Methodist Church, St.
Paul’s Episcopal Church, St. Mary’s Catholic Cathedral, First
Presbyterian Church, the former Christian Science Church (at 505
Seymour) and we’ll finish at the old St. Paul’s German Evangelical
Church, located at Walnut and Genesee. We’ll be talking about a
variety of topics, including architecture, the relationship between
churches and the capitol, how churches benefited from the local
auto industry, and the evolution of a German congregation during
World War I. 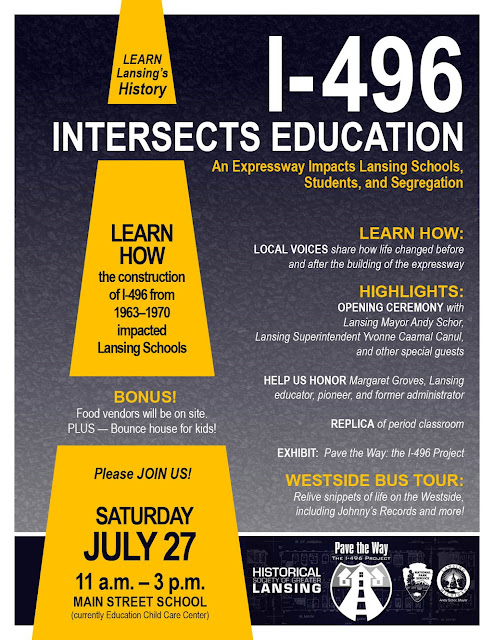 “Intersection of I-496 and Education” will explore the
changing dynamics of education in Lansing during the 1960s,
including desegregation of schools and busing. Former teachers
at Main Street School will participate in a panel discussion, and

the Pave the Way Project will collect ephemera, photographs and
video memories, along with hosting a curated bus tour of the
I-496 route. Anyone who went to school at the Main, Lincoln,
Michigan, Kalamazoo and Sexton schools are invited. Also
during the event, the presentation of the Morris-Peckham Award
will be made, honoring Adolph Burton and Kenneth Turner for

HSGL will be hosting a walking tour on the West Side
focusing on African American history as it relates to the Pave the
Way project. The tour will include the homes of the Letts family
(of Letts Bridal), the McGuire family, doctors, dentists, lawyers,
elected officials, and others. The tour will provide insights into a
tight knit African American neighborhood created as the result of
the I-496 construction. The tour is in cooperation with the West

Side Neighborhood Association.
Posted by Val at 7:15 PM No comments:

HSGL is participating in the 26th annual Juneteenth Celebration. Juneteenth commemorates the end of slavery in the United States. The three-day celebration includes a Thursday kick-off at Lansing City Hall where HSGL will present its annual history award to two individuals who have significantly contributed to the preservation of Lansing's history during the last year.

In addition, under the auspices of Pave the Way: The I-496, HSGL will be gathering stories from neighborhood residents whose lives were disrupted and forever changed by the construction of I-496. Pave the War is a joint project of HSGL, the City of Lansing and the National Parks Service.

In 1870 the State Agricultural College officially opened its doors to female students. In the years since, the MSU campus and East Lansing have been home to increasing numbers of female students who've studied everything from domestic science to music, engineering, and agriculture.

As the decades have passed, MSU women have found community, support, and sisterhood through the Greek Sorority system. HSGL will go walking down M.A.C. - known to many as Sorority Row - where we will discuss women's history, traditions, scholarship, service, and architecture. Among the sororities we'll be featuring are Alpha Chi Omega, Zeta Tau Alpha, Kappa Kappa Gamma, Alpha Phi, Kappa Delta, Sigma Kappa, and Sigma Delta Tau.
Posted by Val at 8:01 PM No comments:

Gargoyles, griffins, lions, and bears, cherubs, eagles, and praying monks - oh my! All these and uncountable more decorative figures adorn the buildings of Detroit, but until Oxford Michigan photographer and writer Jeff Morrison decided to photograph these incredible adornments they were undocumented and often overlooked.

Morrison, in his new book Guardians of Detroit: Architectural Sculpture in the Motor City, gives reads a close-up view of these incredibly, sometimes monstrous, figures with more than 770 photographs gracing the 350-page book published by Wayne State University Press.

Morrison attributes the large number of public adornments on Detroit buildings to "deep pockets, big egos, and men who wanted to build monuments to themselves" and sought out artists to complete the dream. Detroit certainly had its giants of industry, and the names on the buildings often tell the tale: Kresge, Fisher, Book, Buhl, and Whitney.

Ir you are interested in photography, architecture, Detroit, or the artists who created these decorative figures, you will want to join HSGL as Jeff Morrison shows photographs from and discusses his new book.

The HSGL annual meeting will be held a half-hour before the start of the "Guardians of Detroit" program. Executive Board Members up for reelection are: Bill Castanier for President, Valerie Marvin for Vice President, Tim Kaltenbach for Treasurer, and Ron Emery for Secretary. Trustees up for re-election are: Joan Bauer, Jacob McCormick, Bob Rose, and Anne Wilson. Nominations can also be taken from the floor. Please come cast your vote.
Posted by Val at 9:14 PM No comments:

April and May Events

The Office of Mayor Andy Schor, the Capitol Area District Library, and the Historical Society of Greater Lansing are joining hands to host the first walking tour of the season, focused on the south downtown area.

The tour will look at the former Arbaugh’s Department Store; the Bus Depot; the Lansing Women’s Clubhouse; the Midtown Apartments; and Reutter Park, Lansing’s oldest park, named for Lansing mayor and businessman J. Gottlieb Reutter. Also included on the tour are some elegant Victorian-era homes of famous and infamous Lansing residents. The tour will feature the homes of William Kerns, owner of the Kerns Hotel; the founder of Lansing Capitol Savings and Loan Association; an early Lansing alderman and vice president of the original Lansing Brewing Co; and a prominent Lansing attorney who was disbarred for “fraud, deceit and malpractice.”


The ABCs of DNA & Genealogy
by Jessica M. Trotter
Thursday, April 11, 2019 – 7:00 p.m.
Library of Michigan, 702 W. Kalamazoo
Everywhere I turn, I hear people discussing their DNA results. But what can DNA testing really tell you? Should you take a test? What tests should you take? What does it all mean? DNA testing can be a powerful tool. Trotter’s presentation will offer a layman’s overview on tests, testing companies, and how you can use your results, as well as some of the pitfalls to DNA testing.

Jessica Trotter is an Archivist with a Master of Science in Information, Archives and Records Management Specialization from the University of Michigan—but works for the Capital Area District Libraries in Collection Development by day. Trotter’s background with DNA is as a genealogist and genealogy instructor. She first tested her own DNA in 2012 in response to students asking questions on DNA as testing prices came down, as well as out of curiosity. She hoped it might help with a hard-to-trace line of formerly enslaved African-Americans, but in retrospect it actually turned all of her research on that line upside down.

Her presentation on April 11 will look at the three major tests—Autosomal, Y-DNA, and Mitochondrial DNA. She’ll discuss the major testing companies—including Ancestry, 23 and Me, and MyHeritage. And she’ll walk the audience through what the results look like and what you can do with that information.

DNA is now an integral tool in genealogical research but not one to be taken lightly. You have to know going in that you may find out secrets you didn’t know about your family.

Tim Gleisner, Head of Special Collections at the Library of Michigan, will be discussing the life and work of master woodcarver Alois Lang. Lang (1872-1954) was a Master Woodcarver at the American Seating Company and one of the artists responsible for bringing the medieval art of ecclesiastical carving to life in the United States.

Lang was born in Oberammergau, Bavaria, a town long known for its excellence in wood carving. He was apprenticed to his cousin Andreas Lang around the age of 14 and moved to the United States in 1890 at the age of 19. Lang first found work in Boston carving elaborate mantelpieces for Back Bay families. In 1903, Lang moved westward and joined the American Seating Company of Manitowoc, Wisconsin, moving with the firm to Grand Rapids, Michigan, in 1927. There Lang became well known as a prominent ecclesiastical woodcarver. In 1946 the Michigan Academy of Science, Arts, and Letters presented him with a special award for his contribution to art in Michigan.

Tim Gleisner has been Head of Special Collections of the Library of Michigan for the last year. Before that he worked as Head of Special Collections at the Grand Rapids Public Library for 12 years. During that time Tim became acquainted with Alois Lang and the furniture industry in Grand Rapids and West Michigan. Tim’s talk will delve into how master artists like Lang helped to create an image for the furniture industry of Michigan. Discover how this master woodcarver not only changed the religious art here in Lansing, but in Michigan as a whole.

Join Valerie Marvin, Michigan Capitol Historian, as she discusses how Michigan’s three state capitals came to be.
Michigan’s current capitol, the state’s third, opened to great acclaim on January 1, 1879. Students of Michigan history, however, know that the road to that day was a long and winding one.
When Michigan declared herself a state in 1835, Detroit served as the seat of government. The city’s hold on the capital was tenuous at best as the 1835 constitution stated that a permanent seat of government had to be established by 1847. The battle to choose the permanent site took place in the state’s first capitol building, a two-story brick Federal style structure with a thin, steeple-like central tower built 1823-1828. Here legislators from across Michigan voted on dozens of proposed sites before finally compromising on rural Lansing Township—then-home to only eight voters.
Moving the seat of government meant that the state would need to construct a new capitol building. Hastily erected in the last months of 1847, the wooden structure was always intended to be temporary. Poor economic conditions and the Civil War ultimately extended its use 30 years, during which time everyone in government complained about its cramped quarters, poor ventilation, and the ever-present threat of fire. Finally, in 1871, Governor Henry P. Baldwin called for the construction of a third capitol and challenged the legislature to appropriate money for the project, which was soon underway.
From 1872 to 1878, Lansing residents watched eagerly as the new state capitol began to rise up. Crafted of brick, sandstone, and cast and wrought iron, Michigan’s new building clearly echoed the appearance of the newly enlarged national capitol in Washington D.C., a sign of the state’s loyalty to the Union. When it opened on January 1, 1879, eager citizens poured in from across the state to visit the state’s new treasure, confident that Michigan finally had a dignified capitol that would stand for the ages.