HSGL is excited to announce that we are returning to Moores River Drive for a second tour featuring a new slate of homes this fall! Join us on Sunday, September 16 and visit some of Lansing's most beautiful homes, including the Potter House and a house designed by architect Lee Black. The homes range in style from Tudor Revivals to sophisticated Four Squares and a new retro Modern home with touches of Art Deco. To learn more, click on the "2018 Moores River Drive Home Tour" tab at the top. 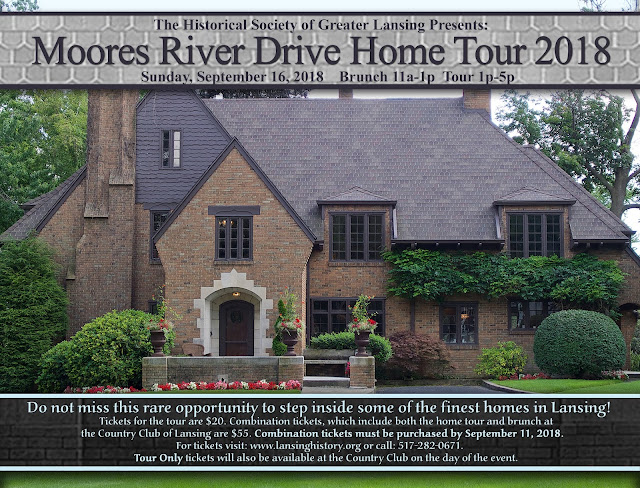 This fundraiser for the Historical Society of Greater Lansing is being generously hosted by the Moores River Drive Neighborhood Association and the Riverside Home Association. All proceeds benefit HSGL.

Kickstepping Through the Years:
The History of the Spartan Marching Band
by Jacob McCormick
Thursday, September 27, 2018 – 7:00 p.m.
Library of Michigan, 702 W. Kalamazoo, Lansing

Join HSGL for a program on the historic 148 years of tradition, innovation, and excellence of the Michigan State University Spartan Marching Band. Historian and Spartan Marching Band alumnus Jacob McCormick will share the history of the Big Ten’s oldest band and its deeply rooted traditions. From its military origins beginning in 1870 through the introduction to the Big Ten in the 1950s, the SMB has performed nationwide and even internationally to much high acclaim. A collection of Spartan Marching Band artifacts will also be on exhibit during the program.

You are also encouraged to visit the Spartan Marching Band rehearsal, Monday through Friday, 4:30 p.m. to 6:00 p.m., at the Forest Akers Trust Practice Complex on the corner of Shaw Lane and Chestnut Road on the campus of Michigan State University.

We’ll have you seeing double through the entertainment media of the late 19th and early 20th century¾the stereograph. Historians Jacob McCormick and Craig Whitford will introduce you to the little-known world of greater Lansing stereoview images. They’ll provide you with the history of the stereograph as well as an overview of those local and national photographers that created them. You’ll be treated to a tour of images captured as a double-photograph that, when viewed with a stereoscope, produces a three-dimensional view. Many of the images Jacob and Craig will present have not been seen before.